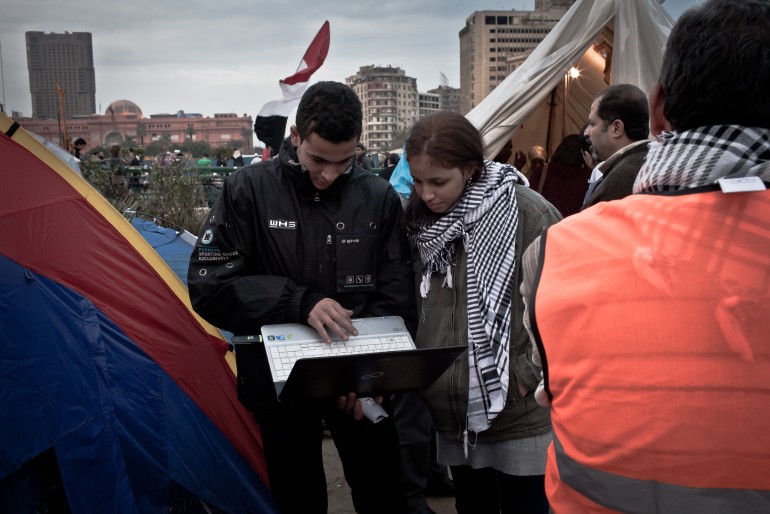 A new project is collecting data to offer insights from digital campaigns around the world.

The past few decades have given scholars a rich collection of data that can help them analyze political change, whether Latin America in 1980s and 1890s, the former Soviet Bloc after 1989, Africa since the 1990s, or the Arab Spring in 2011. It was the last transformation, however, that has galvanized researchers to assess activism and upheaval in the context of the digital age. Even though the 2011 wave was not, of course, the first time that digital tools were used, what made the Arab Spring a compelling case was that citizens had more hardware on hand than before to spread their movement from below, as well as new virtual networks that complemented and reinforced networks on the ground.

Initially, the digital optimists seemed to have the upper hand, arguing that social media and its array of platforms vitally contributed to these movements – and made the grip of unelected rulers elsewhere all the more precarious. The digital pessimists then struck back, citing example after example of autocratic governments that used technology ruthlessly and efficiently to stifle dissent, monitor civil society groups more closely, and further consolidate power.

With the support of the U. S. Institute of Peace, Mary Joyce, Frank Edwards, and I led a research team to analyze at some 1,200 cases of digital activism worldwide, including around 400 in the past three years, to dig into the data. First, we defined activism as efforts not just at regime change, but campaigns for policy changes at all levels of government. Second, we made sure this was a truly global sample – going far beyond the best-known cases that both sides in this debate had cited. Our initial research in this Digital Activism Research Project showed us how much more work can and should be done, but several lessons jumped out right away.

Most important, our study lets us find a way outside the confines of this debate, as it shows that the lessons are more nuanced. Our findings show that digital activism does indeed count as real civic engagement, but we have to understand the many dramatic stories of local and regional change, not just turnover at the top. And even if the headline story is about the fall of a dictator, there are invariably more interesting developments going on below, as digital activism engages civic life in countless ways. Furthermore, our findings apply to governments regardless of regime type. We should not think of these cases just in the context of resistance against sclerotic regimes, but in one of broad political change.

Every case of digital activism is its own story, and from country to country there are key factors that provide the important context for why some social movements triumph and others falter. Moreover, what makes studying social movements so difficult is that our recent history is full of partial successes. The public record on protest movements is always incomplete. But with a focused look at digital activism over the last few years, there are a few clear conclusions we can draw from the real-world examples.

One key measure of success for a social movement is getting people into the street. Street protests alone do not always achieve their goals, but moving away from the computer to out on a street march is a crucial goal for groups trying to initiate political change. These days, one thing that makes the study of modern social movements so interesting is that when people march they stay connected. Taking to the streets is still an important goal of online activism. But these days, when people take to the street, they take their mobile phones with them.

On this question, digital activism has a demonstrated, positive impact, especially when civil society groups use digital tools and focus on the goal of changing government policy. If they have this objective, they can succeed with only modest street protests and a few digital tools. And this seems to be true regardless of regime type. By contrast, if groups are not united on which policy they want to change, success is more elusive.

What are the means that make a digital activism campaign successful? It is a mistake to tie any particular tool to a theory of political change. Calling something a Facebook Revolution or Twitter Revolt might make for compelling headlines, but it does not help us better understand the causes and consequences of modern political engagement. In our research, we found no clear associations between particular tools and specific campaign outcomes. Although Facebook and Twitter often dominate across movements, most groups use a mix of platforms rather than relying on just one.

We also found that digital activism is an overwhelmingly non-violent undertaking. There were only rare cases when mobilizing groups used digital tools to encourage violence against their opponents. Moreover, hacking and other forms of “technical violence” are rare. Of the campaigns we looked at, only three percent involved offline violence, and two percent involved hacking against targets. As a general rule, digital activism is focused on civic engagement, not harming people or property.

We also were able to unpack just how many different applications have been used. Social networks like Facebook and micro-blogs like Twitter were each used in about half of all campaigns worldwide. But digital video was also popular and integrated into almost 40 percent of campaigns, followed by e-petitions, with 25 percent. There was considerable regional variation in how groups used these tools: video is more popular in Eastern Europe than micro-blogging, but the reverse holds in West Africa.

Our broad sample was far more comprehensive than most research to date on digital activism, which is usually focused on case studies of individual campaigns or a network of campaigns working at a single point in time or around one issue. We deliberately took a comparative perspective, and, as I emphasized above, our analysis was not limited to the standard or most high-profile cases, or to the successful campaigns.

We used the tool of “fuzzy-set logic” statistical modeling – basically, an approach that measures cases according to their degree of membership (usually set between 0.0 and 1.0) in qualitative categories. For example, rather than say a policy goal is achieved (1.0) or not achieved (0.0), we can assign varying degrees of success, say, 0.50 or 0.75. The benefit of this technique is that it can set aside irrelevant variation on either far end of the scale, and it helps us use variables that are “nearly necessary” or “nearly sufficient” and still teach us about the causes and consequences of digital activism.

This way, we could look for plausible patterns of shared causal conditions and diverse outcomes by reducing the important features of hundreds of cases to a few variables. And to identify the key factors behind the success of digital activism, we also had to study the failures. Perhaps most important, this technique was useful because it was grounded in the observed, real-world experience of hundreds of digital activism campaigns.

Under this approach, the two most important measures of accuracy are what we term the coverage and consistency scores. Coverage refers to the percentage of cases explained by the variables in play. Consistency refers to the degree to which cases adhere to a particular mix of variables. We drew up a score for “raw coverage,” which indicates the proportion of the outcomes explained by the variables in question, as well as a “unique coverage” score, which indicates the percentage of the outcomes that are exclusively explained by one particular mix of factors. Both scores are important because some cases can be sensibly explained by several causal recipes, while others can only be explained by a particular causal narrative.

In other words, digital activism campaigns are most successful at drawing public demonstrations of protest when the government is the target. In addition, they are most successful when the regime is more authoritarian or when the campaign has employed multiple digital tools. Together, these two “recipes” cover 40 percent of our cases with a high degree of consistency.

In other words, patterns of success and failure do not privilege Facebook over Twitter, or Vimeo over YouTube. If anything, using singular digital strategies and having all your organizing work go into one platform is the mistake. Having multiple tools, reaching your audience several ways, and having a diverse toolkit are the most important ingredients for impact.

To be sure, some pundits will still downplay the value of having people use their mobile phones and Internet connections for political muckraking. But our data show the pace of digital campaigning is on the rise, and campaigns are ever more creative. The tools that get built may not have an immediate impact, but they get passed on to the next campaign. Ultimately, digital networks are social networks. Even the movements that fail to have an impact generate social ties that last well beyond any particular campaign.