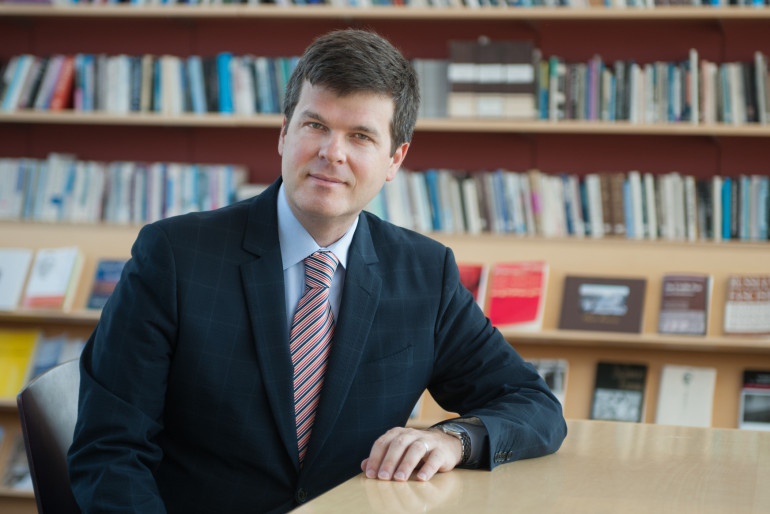 Law professor Tim Edgar has worked on both sides of the surveillance debate, and he sees lessons to privacy advocates and government officials alike.

As an American Civil Liberties Union lawyer, Timothy Edgar castigated the federal government’s anti-terrorism and surveillance laws. Switching sides to join the government, he then had a hand in shaping them.

Now, as a visiting fellow at Brown University and adjunct law professor at Georgetown, Edgar devotes his time to explaining how the laws work – drawing on his unparalleled background of being a key player on both sides of the highly contentious issue.

“I have a unique perspective on the vast gulf between the way the public views spy agencies and the way the intelligence community views itself,” he wrote.

From 2001 to 2006, Edgar was the ACLU’s national security counsel. After the Sept. 11 attacks, he was a prominent critic of the USA Patriot Act, which granted the government sweeping new surveillance powers. Edgar described the law in 2004 as “one of the most controversial measures ever passed by Congress.” He also attacked other initiatives from the George W. Bush administration, such as the military commissions created as an alternative to civil and military courts.

In 2006, however, Edgar took a new job: the first deputy for civil liberties at the recently created Office of the Director of National Intelligence, a job in which he reviewed the terrorism watch list and other sensitive programs. Three years later, he stayed into the Obama administration as the White House national security staff’s first director of privacy and civil liberties. Among other things, he worked to set new guidelines for what sort of information the FBI can collect on people with suspected terrorist ties before it launches a formal investigation.

Edgar agrees with his former ACLU colleagues that spy agencies too often rely on the “just trust us” argument in defending their work, including their response to the Snowden-prompted revelation that the agency has obtained a massive amount of Americans’ phone and Internet records. But civil libertarians, he says, can be too quick to fear the worst of those agencies.

When he worked for the ACLU, Edgar recalled in an interview, he always assumed the government would use its power in the broadest way possible. “That was my modus operandi as a civil liberties and privacy advocate: ‘Look at all the things that could be bad,’’’ he said. “When I went into the government, I learned that not only were people there conscientious, but that [his old way of thinking] is not always the case.”

Another thing civil libertarians do not always realize, he said, is that as with so much else in government, the national-security world moves at a snail’s pace.

“Even when they do use [their powers] more aggressively, it’s slower” than people might expect, he said. “There’s a lot of interagency debate. Years may go by before the government has it worked out and says, ‘We can actually do this.’’’

The Snowden case has led him to begin revising his teaching syllabus. Because so many programs that were secret are now public knowledge -– such as PRISM, the massive data-mining effort that has been at the center of the controversy -– Edgar says he can be much freer about what he tells his students.

“Teaching national-security law has always been an exercise: How do you provide the students with insight into how the national security apparatus works when so much of it is classified?” he said. “It helps a great deal if you have some inside experience in one of the agencies. You have a better sense of how things actually work. Otherwise, you’re just relying on the bare statutes and executive orders and rules. That doesn’t give you a sense of how these rules have been interpreted and applied in practice.”

Edgar is not the only one in academia taking advantage of the window that Snowden has opened. At the University of Florida’s Levin College of Law, professor and dean emeritus Jon Mills said he already has been making the issue a focal point of debate in his class of third-year students.

“We just had a discussion about how you feel about the acquisition of information, metadata and so forth, that the government says they have but won’t use,” said Mills, the author of a book on privacy. “That generated a great deal of discussion. Someone said, ‘If they have that information, how do we know you won’t have someone like Richard Nixon that will get an enemies’ list?’’’

And at Wayne State University’s law school, associate professor Paul Dubinsky said the Snowden case “already has had a large impact on my syllabus this semester … Students are always drawn to things that are current. Snowden touches on many important things, and has the added advantage of being current.”

As for Snowden, much of what the former contractor revealed “never should have been secret in the first place,” Edgar said. But he is highly critical of the now-famous fugitive for what he considers his “extremely dangerous and reckless” actions.

“He took huge numbers of documents and worked with journalists on what was okay to reveal and what wasn’t okay. That’s not a good way to run a highly sensitive program,” he said. “To compound matters, he goes off to China and Russia, two of our most prominent adversaries in the intelligence world.”

Still, he adds, “It’s a fascinating subject for the students to talk about.”

Has taking both sides to task in such fashion landed Edgar in trouble? Not yet, he says.

“I think certainly, some people are not going to be happy with everything I say,” he said. “But I try to be as straight as I can with how I view it. That’s all I can do.”