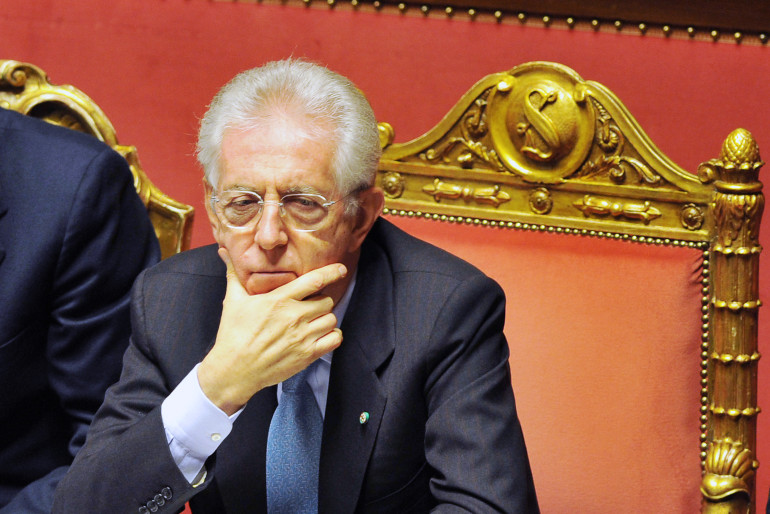 Voters across the world increasingly prefer technocrats to run affairs. Why are they so popular?

Wherever we turn in this time of austerity and financial crisis, we find technocrats in positions of political power. In just the past few years, Alassane Ouattara, an economist who rose to the position of deputy head of the International Monetary Fund, became president in Côte d’Ivoire after a bloody post-election struggle for power with his predecessor, Laurent Gbagbo. Mario Monti, known as “Il Professore” for his expertise in economics, became prime minister in Italy and quickly appointed a technocratic cabinet, a contrast to the iconoclastic Silvio Berlusconi. And in the United States, Mitt Romney frequently chose to downplay his record as a moderate state governor in favor of touting his prowess as a businessman. Meanwhile, in Mexico, every president in the last 30 years, since the dawn of the Latin American debt crisis in 1982, has held a graduate degree from Harvard or Yale in public administration, business, or economics.

This is not an isolated trend in just a few countries. The last 50 years have witnessed the rise of a new kind of leader in international politics: the Western-educated technocrat. Yet only a handful of scholars have compiled data that paint a portrait of who these leaders are — and why they have grown in global prominence. To answer these questions, Gabriella Lloyd, Irfan Nooruddin, and I have sought to do just that, turning our gaze to people and leaders from political economy’s more traditional focus on institutions. And fortunately, we now have a wealth of data to analyze.

To answer this question, we collected data on 1,461 effective heads of government in 147 sovereign countries between 1946 and 2008, coding the universities they attended, subjects they studied, and work experience before becoming heads of government. We define a leader as being a technocrat if he or she held a graduate degree in finance, economics, or public policy. And the figure below shows just how pronounced this trend has been. 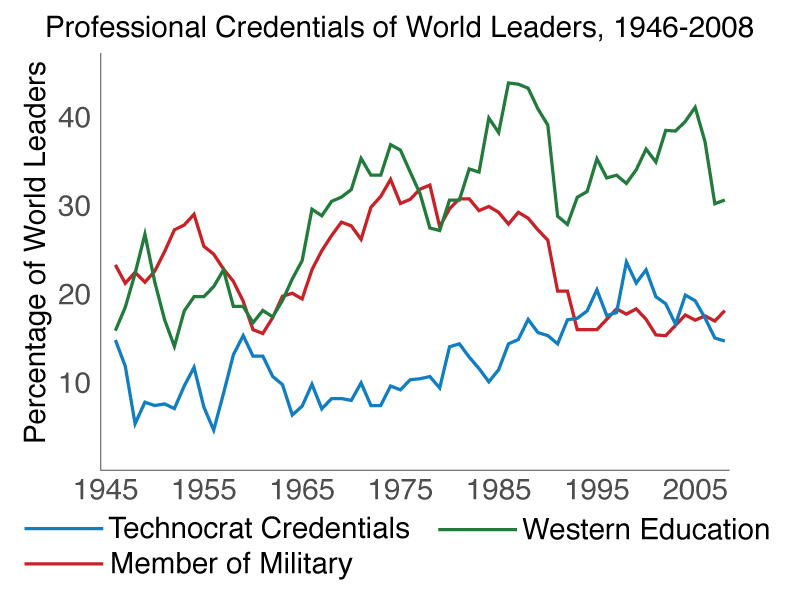 As of the mid-1970s, roughly one in every 10 heads of government qualified as a technocrat. But over the next 30 years, that figure steadily rose until the early 2000s, when 20% of world leaders met our standard. With some small fluctuations, this share has held largely since then. This group has also become highly cosmopolitan; between 30% and 40% of world leaders since 2000 have been educated in either the United States or Western Europe. Finally, the rise of the cosmopolitan technocrat has come at the expense of the soldier. Research by José Cheibub, Jennifer Gandhi, and James Vreeland shows that the proportion of world leaders with military experience dropped from a high of around 30% in the mid-1970s to under 20% by 2008. For the first time since the end of World War II, more technocrats are running countries than soldiers are.

Scholars of democratization and economic development are creating an exciting new research agenda on the causes and consequences of the rise of technocrats as heads of government around the world. And several early lessons are taking shape. One is that technocratic leaders are more likely to assume power in democracies than in non-democracies. Another is that economic crises also tend to sweep technocrats into political power, precisely when their expertise in finance and economics appears most desirable. This is especially true in countries that lack credibility on international credit markets, as is often the case in young democracies.

Do technocrats govern differently once they capture high political office? Again, the early evidence is yes. The reason seems to lie in their professional formation. Technocrats trained in Western departments of economics, especially those with a more neo-liberal bent, tend to use their time in office to enact policies consistent with their training, such as liberalizing capital accounts and privatizing state-owned enterprises. It is no surprise, then, that the rise of technocrats after the late 1970s coincided with the neo-liberal turn in economic policymaking. Technocrats also benefit from building informal social networks with their fellow students in Western universities, networks they often deepen through employment at international financial institutions. Technocrats, in short, constitute an “epistemic community” of like-minded professionals with similar educational and professional backgrounds. My own research with Lloyd and Nooruddin suggests how powerful these networks can be; for example, when technocrats hold high political office in new democracies, the countries they lead are more likely to receive assistance from the IMF.

This research is still in progress, but has begun to help us understand why technocrats have increasingly held high political office and how they govern differently than other types of politicians. The rise of technocrats, however, also demands that we consider the question of why voters and politicians value technocrats. Politicians are an easy object for derision, even among themselves. Calling a decision “political” is a sure-fire way to impugn it. Technocrats promise a different style of governance, one in which expertise and objectivity matter more than venal political calculation. In a way, the desire for technocratic rule hearkens back to Plato’s conception of the philosopher king who rules with wisdom and knowledge.

Technocratic rule holds yet another promise, that of a value-free politics. The vexing political issues of our day that enjoin us to deeply consider our political values — climate change, racial relations, and privacy in the global war on terrorism – are in part the cause of political conflict. So the prospect that these troubling questions ultimately have technical solutions remains tempting, since it allows us to evade the political act of reconciling our values to ourselves and to each other. TED talks are perhaps the most prominent public forum for such thinking, promising that technological change and creative thinking hold the key to human progress, rather than struggles over value questions such as justice and equity, as cultural critics such as Evgeny Morozov have argued.

Yet we cannot escape the political, no matter how hard we may try. All forms of politics, even anti-politics, are embedded in political values. A desire for technocratic politics constructs an ethos of rule favoring certain values – expertise as a form of political legitimacy and economic efficiency as the goal of economic policy – over others. Technocrats may offer us improved economic management, but not an escape from the importance of values in politics. Political questions are, in the end, political.