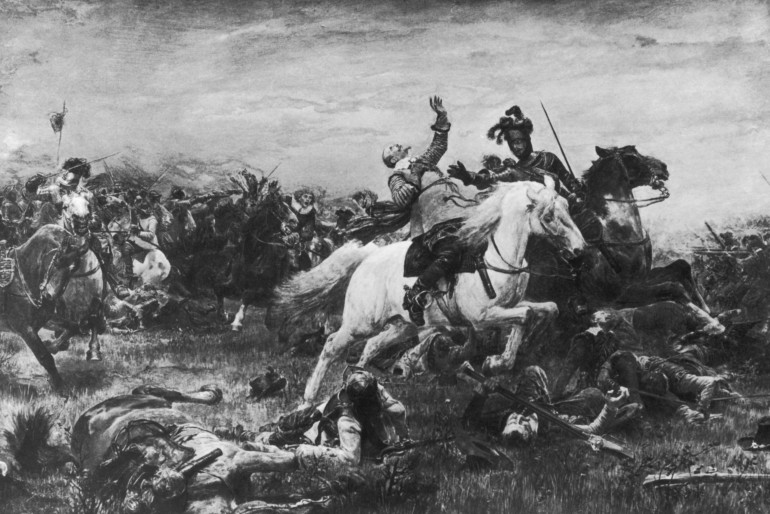 Print & PDF Version
The dark days of the ‘Iron Century:’ The Battle of Lutzen and death of Swedish King Gustavus Adolphus in 1632, from a painting by Karl Rauber (Photo by Hulton Archive/Getty Images).

What the calamities of the seventeenth century can teach today’s scholars about climate change, war, and policy-making.

The threat of climate change brings with it rising sea levels, desertification, and increasingly powerful hurricanes. But aside from these directly weather-related problems there lies another concern: increased human conflict as a result of the catastrophic changes in weather patterns.

Scientists are developing ever-more sophisticated models to forecast how the actual weather will change, but predicting war and state failure is still a guessing game. Some political scientists and economists have advanced research in this field, but with only limited results. Indeed, careful quantitative analysis by economists, political scientists, and other social scientists can only tell us so much, given the slow, subtle nature of climate change. By contrast, an alterative humanist approach might shine some light on the problem. A case in point is Ohio State University historian Geoffrey Parker, author of Global Crisis: War, Climate Change, and Catastrophe in the Seventeenth Century.

To assess these two approaches, let’s first turn to a recent article in Science, “Quantifying the Influence of Climate on Human Conflict” by Solomon M. Hsiang, a professor of public policy at the University of California-Berkeley, and two colleagues. The piece made news this summer by finding “strong causal evidence linking climatic events to human conflict,” in the words of the article abstract, and the authors got an even bigger perch with a piece in The New York Times on Sept. 1. But their study showcases the limits of their approach more than anything else. While the authors conducted a meta-analysis of previously published work by other scholars, they looked only at studies that relied on quantitative research, employing statistical analysis. This would seem to lend more rigor to their article, but it in fact underscores its weakness.

First, the authors include an extraordinarily wide range of conflicts in their purview, from the wars in the modern day to the decline of the Classical Mayan civilization. This is so all-encompassing that it does not tell us anything at all. Second, they conflate “weather” with “climate,” treating a hot day in one study the same as climate change in another. And by basing their study on previous papers on climate change, they rely almost solely on the work of scholars who — of course — found evidence that climate change creates conflict. Why else would these researchers have begun their time-consuming work if they did not already believe that climate was involved in violence and warfare?

Hsiang and his colleagues claim to have eliminated this kind of publication bias, but they have not. The fact remains that there is no existing data set compiled by researchers who have studied historical violence while controlling for the absence of climate change. In the Times essay, the authors claim that their “findings held at very high levels of statistical confidence.” Of course they did, since they relied totally on the work of like-minded researchers. In their attempt to rely only on statistical analysis, the authors are forced to reduce the variety of human experience and the nuances of climate change into exceedingly narrow criteria, leading to a very blunt instrument indeed, one incapable of subtlety. However earnest their intentions were, this article is painfully naive.

There are better attempts out there, such as last year’s special issue of the Journal of Peace Research, “Climate Change and Conflict.” To start with, these authors treat their evidence much more carefully. They pay more attention to how exactly climate change might cause conflict, and they zero in on small regions in their research. That said, their findings are small-bore and inconclusive, though they are more reliable than those of Hsiang and his colleagues. Some authors find no link at all and those that do, find a relationship limited in scope. Almost all of them focus on the Sahel, the arid geographic band in Africa just south of the Sahara, which has always been one of the most ecologically fragile, and politically unstable, places in the world. No matter how much climate change might be hurting the residents of the Sahel, even in the best of times it was never an earthly paradise.

There is, however, an antidote to these studies: Parker’s Global Crisis. Published this spring, his sweeping account surveys a century across the entire world, including the most developed countries of the day such as China, the Ottoman Empire, and France. These were not the Sahels of the seventeenth century. Not only does Parker explain how climate change added to the misery of the so-called “Iron Century,” he also points out how states and societies were able to take action to mitigate the violence and unrest that climate change caused. The irony of the book’s release is that while it drew attention from reviewers in professional journals of history — who generally agreed that the 400-year-old crisis offers lessons for today — reviewers in general-interest publications (with a few exceptions like The Boston Globe and the Times Literary Supplement) ignored that particular conclusion of Parker’s work, focusing instead on its elegant narrative and detail.

Parker’s subject is the crisis of the seventeenth century, a period already infamous to historians as an age of inter- and intrastate wars, rebellions, famine, and epidemics. The calamity most well known to English speakers is the English Civil War, but the century also saw the Thirty Years War in Germany; the “Ottoman Tragedy” in the Middle East; the Russian “Time of Troubles;” and perhaps worst of all, the fall of the Ming Dynasty to the Manchu rulers in China.

Other historians who have written on this period have noted the simultaneous timing of these upheavals, and some have emphasized the similarities as these disparate political cultures first buckled and then reemerged with a new legitimacy. But one of Parker’s great contributions is to add another element that unites all these disasters: the effects of the Little Ice Age, in which the global temperature dropped 1.5° Celsius beginning in the 1610s and ending around 1710.

A great strength of Global Crisis is that it describes precisely how climate change was able to cause such misery. Where Hsiang and his fellow authors measure only rising temperatures, Parker focuses on the famines that resulted from long-term changes in weather patterns, most commonly as a result of drought or flooding. He is careful to hold off on making a broader claim that the wars and unrest of the seventeenth century were explained solely, or even mainly, by climate change, but he makes a strong case that climate-induced famines helped intensify human misery. And this misery was made worse and more enduring by the decisions of governments to pursue wars and higher taxes to fund their military instead of providing for their starving subjects.

Moreover, Parker convincingly argues that climate change did directly cause upheaval in a few instances, such as the Cossack rebellion against the Polish Commonwealth, which in turn contributed to the fall of Poland as a European power. In this case, Cossack leaders decided that the only way to feed their followers was to strike north, to the more fertile regions beyond impoverished Ukraine. Most fatefully, Manchu leaders felt that they needed to invade Ming China, already teetering after a rebellion, to feed their subjects. This first happened in 1618, when they seized a piece of northern China, and then again in the middle of the century, when wet, cold weather compelled them to begin raids that led eventually to the conquest of all of China.

Perhaps the conclusion most meaningful for today’s readers is that states were able to mitigate and sometimes prevent the effects of climate change even in the seventeenth century, in the absence of modern scientific tools or well developed social policies. Japan, for example, largely escaped the general crisis. Instead of launching wars, its government used its power and resources for famine relief. Japan also had a more productive economy than most nations at the time and was relatively under-populated, which meant that the food resources had some slack in the system. And to some extent, seventeenth-century Japan was already in stronger shape following the turmoil in the sixteenth century, which had reduced the population and led to the emergence of the Tokugawa shogunate, a more stable and legitimate government.

Indeed, the cycle of disaster and renewal that Japan had undergone in the sixteenth century is what other societies around the world experienced during the general crisis. Over decades, many of these governments were eventually able to adjust, even before the temperatures rose back to normal levels. As Parker points out, the Little Ice Age lasted until the early eighteenth century, but the great crisis had ended by the late seventeenth.

What can historians and readers take away from this? States and their subjects had learned from their terrible experience and emerged with new compacts between governments and the societies they governed. Many of these states also stopped waging interminable wars and turned their attention to welfare initiatives such as establishing granaries and issuing public health regulations. New directions in statecraft were especially prominent in Europe, and newly intensive agriculture that developed in response to the crisis helped Europe start to outpace China and India as economic motors of the world economy. In this last example, in particular, Global Crisis proposes a new explanation for the so-called Great Divergence, in which Europe replaced China as the center of the modern world.

Of course, unlike today, no one in the seventeenth century knew why the climate was changing, and no one knew what could be done about it, outside of spiritual renewal and prayer. Noting how much we have learned since, Parker closes by calling for action to avoid a twenty-first century global crisis and emphasizes what catastrophes are at stake if we do not act. Building on his own findings, though, he could have gone further and concluded that, like eighteenth-century Europeans, societies that directly address the effects of climate change today will not only help their people, but be more competitive against rivals in the future. One hopes readers of Global Crisis will learn from the history it lays out for us and come to see climate change as not just a challenge, but an opportunity.