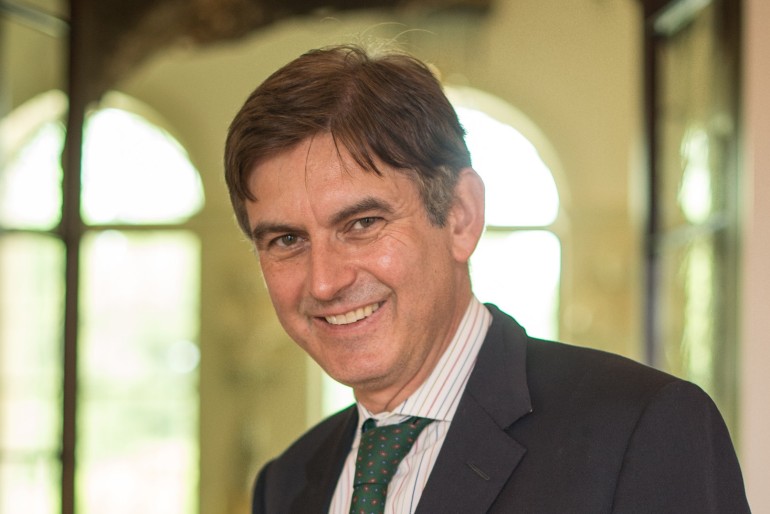 Andrew Jackson O’Shaughnessy is the Saunders Director of the Robert H. Smith International Center for Jefferson Studies at Monticello and Professor of History at the University of Virginia. He is the author of The Men Who Lost America: British Leadership, the American Revolution, and the Fate of the Empire (Yale University Press, 2013), a work that drew special attention for its focus on key decision-makers on the British side. Symposium Magazine interviewed him in October.

Whether it is in film, museums, or battlefield exhibits, certain historic myths and half-truths seem to endure in American culture. One of your targets is the perception that the British lost the Revolution due to their incompetence. What is it like as a historian to correct these views, as you did in your book?

I do understand the need for preserving myths up to an extent. But we also lose an opportunity to look at both sides clearly. If all we do is portray George Washington as victorious and not talk about his many setbacks, we won’t understand the man. In many ways, the lesson to take away from Washington was that he was able to persevere and learn from his many mistakes. And he is a greater individual for that. If we cling to this myth of incompetence among the British, it diminishes the achievements of commanders like Washington and Nathanael Greene.

We also lose sense of how closely the war was fought. In my book, I argue that while there was major support in the colonies for the revolution – which the British underestimated — the anti- government, anti-tax sentiment was so extreme that it almost bankrupted the cause. Washington had to borrow money from the personal credit of the Comte de Rochambeau in order to march his troops from New York to Yorktown, while Congress relied heavily upon loans from France.

I should add the purpose of my book was not to romanticize a particular group of British leaders but to make the point that these were men of substance. This was, in fact, a competitive aristocracy, because under the practice of primogeniture, the eldest son inherited the majority of the family wealth, while the younger sons had to go off and earn a living. The military was the most obvious route, so it was much closer to a meritocracy.

That all said, my aim was both to critique the myth of British leadership found mostly in media portrayals and popular histories but also to contribute to the scholarship — to engage both a scholarly and lay audience.

You often point to Mel Gibson’s “The Patriot,” which came under a lot of fire, as an example of how these erroneous conceptions of the war persist.

I use this movie a lot when I give my talks. And yes, it was criticized on many fronts. Spike Lee and others saw a sanitized picture of slavery, and because of some well-known inaccuracies, it’s one of the few movies that British film-goers actually got upset about. One of my favorite examples to point out is the scene when the British Gen. Cornwallis complains about his blanket and obsesses about his dogs like a privileged aristocrat, and his home is far more elaborate than any house in America at the time. None of this is true.

When we step back, though, we see the film is very typical of movies about the American Revolution, especially its depiction of an inept British leadership. This is simply not the case, as my book shows. The irony is that Mel Gibson could have made this into a great film if he had depicted what the conflict really was — both a civil war and a sharply contested war with Britain.

Many Americans also have this idea that much of the fighting was unconventional guerrilla warfare, another misconception fostered by “The Patriot.” In fact, it was a very conventional war fought by conventional armies. There were a few cases where guerrillas were successful and could hold a stalemate, especially in the South, but those victories could not have been possible without the achievement of the central army. All the major battles of the war – Saratoga, Yorktown, White Plains – were conventional European-style battles.

This is an important point, because Washington was not just concerned about winning, but winning in a way that made the cause look civilized compared to Europe. In guerrilla warfare, you see a breakdown of society and government, leading to anarchy. This could have happened very easily here, but it did not.

What are some other examples you like to point out?

If we go beyond film, the popular historian Barbara Tuchman also played up these myths, in her book March of Folly, describing the war as an unnecessary mistake. A third of that book is devoted to portraying a caricature of the British elite and British commanders. But we need to remember that her obsession at the time was the Vietnam War, and she wanted to show the folly of war.

On the flip side, I thought HBO’s “John Adams” was much better, in terms of accuracy as well as nuance. We have, for example, that memorable scene of Americans tarring and feathering a loyalist in Boston. It’s a horrible and dramatic act of cruelty – and it really happened. I also like to show the clip of Adams presenting himself as first American diplomat to George III. The entire dialogue in that sequence is reproduced from Adams’ letter describing the meeting. And that vignette captured very well the feelings of both sides. Both he and George III showed great magnanimity.

Why do you think some of these myths and half-truths endure?

At one level, we understand that nations need myths, and that the American Revolution binds us together. And when we look to museums and battlefield displays, we still see this narrative of a united cause. But I think one reason there was a misunderstanding for so long is that it took root on both sides. In Britain, following the revolution, the generals and politicians sought to blame each other. So the idea that poor leadership “lost” the colonies became even more powerful than here in the U.S. We always want to explain away failure, and for Britain, this wound up being portrayed as just one bad chapter in between the victories of the French and Indian War and the Napoleonic wars.

This is part of my argument as to why the British did not, in fact, entirely “fail.” They succeeded in defeating the French Navy after Yorktown and preserving much of the rest of the British Empire, which covered half of the global population by the time of George III’s death in 1820. It had become the largest empire in world history.