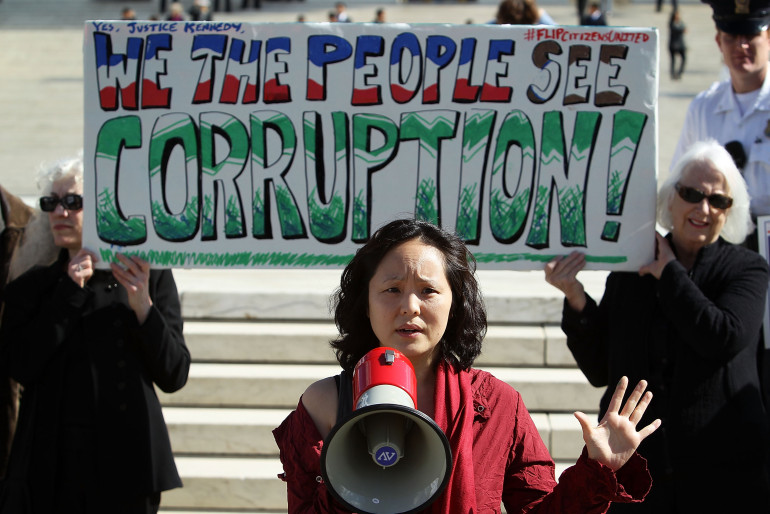 The reputation of big business has taken blow after blow in the last few years. The global financial crisis revealed the risks to the economy of Wall Street excess. The Deepwater Horizon oil spill showed the dangers to the environment of corporate decisions that externalized the possibility of serious harm. The explosion of corporate expenditures in the 2012 election cycle indicated that corporations were attempting to exert their influence over our democratic life.

Americans are terribly skeptical of big business, and probably increasingly so. According to a 2012 Gallup poll, Americans’ satisfaction with the size and influence of big business is near record lows, and has fallen by 40 percent in the last decade. This skepticism is feeding a lively debate — largely between two camps on the ideological left — on about how to take advantage of this moment to rein in corporate power. Although both camps distrust corporations, they are fundamentally at odds over not only possible remedies, but the nature of the problem. The crucial difference is over what might be called corporate “citizenship.” One camp sees corporate power as something that can be used constructively; the other sees it as the evil to be corrected.

For decades, there has been a vocal minority of corporate law scholars (including myself) who have challenged the American corporation to broaden its role in society and enlarge the obligations it owes beyond the bottom line. These scholars have assailed the norm of shareholder primacy and called on corporations to recognize and act on the interests of all stakeholders — view sometimes called “stakeholder theory.” These critics, in effect, call on corporations to act as if they were players not only in the private sphere but in the public one as well. To act, one might say, as citizens. To call on corporations to act as “good corporate citizens” means that they should act as if they have broader obligations to the polity and society that cannot be entirely satisfied by reference to their financial statements.

Meanwhile, a separate camp of corporate critics — less academic and more activist — challenges the corporation to stay within a narrow economic sphere. Corporate activity in politics and the public sphere is viewed skeptically, even hatefully. The most pertinent example of these beliefs is the current effort to amend the Constitution to take away corporate “personhood.” The thought of corporations acting as “citizens” — whether for progressive ends or not — is seen as, at best, nonsensical and, at worst, destructive to democracy. This camp also strenuously argues against the 2010 Supreme Court ruling in Citizens United v Federal Election Commission, which unleashed corporate political expenditures, and it has pushed for tougher campaign-finance legislation so that corporate political influence is circumscribed.

It has gone unnoticed until now that the work of the pro-corporate citizenship scholars often directly conflicts with the work of the anti-corporate personhood activists. The arguments of those opposing corporate constitutional rights contradict and undermine the efforts of those who call on corporations to take a more active role in society to protect the interests of all corporate stakeholders, and vice versa. For the anti-personhood activists, the remedy is to keep corporations within a narrow purview; for the corporate citizenship scholars, the remedy is to ask the corporation to acknowledge and accept a broader range of obligations. The core tenets of the progressive corporate law movement include the principles that shareholders are not supreme, and that corporations should be measured by more than economic measures. Anti-corporate personhood activists, meanwhile, often argue for limiting corporate rights by pointing out that the shareholder owners should be protected from managerial misuse of their funds, and that corporations should not themselves engage politically because they have only economic natures.

This latter view surfaced in the Citizens United ruling itself, in which Justice John Paul Stevens penned the lead dissent and argued that corporate speech should be limited to protect shareholders’ investments. He saw shareholders as owners, as “those who pay for an electioneering communication,” and who “invested in the business corporation for purely economic reasons.” Moreover, Stevens argued that corporate political speech did not merit protection because “the structure of a business corporation … draws a line between the corporation’s economic interests and the political preferences of the individuals associated with the corporation; the corporation must engage the electoral process with the aim to enhance the profitability of the company, no matter how persuasive the arguments for a broader … set of priorities.” Stevens even quoted the controversial American Law Institute Principles of Corporate Governance: “[A] corporation … should have as its objective the conduct of business activities with a view to enhancing corporate profit and shareholder gain.”

It looks like the opponents of Citizens United are so convinced of the dangers of corporate political activity that they are ready to throw stakeholder theory under the bus as part of their broader fight. But the difficulties run the other way as well. Case in point: the work of stakeholder theorists is now being cited to bolster the arguments of those seeking broader constitutional protections for corporations. The best current example is in the context of the recent suits brought by certain corporations to challenge the portion of the Affordable Care Act that requires employers to provide employee health insurance that covers contraceptive care. As many as 60 lawsuits are now pending across the country, and two — one from the Tenth Circuit and one from the Third — have already made it to the certiorari stage at the Supreme Court. These cases turn on the question of whether corporations may assert religion-based conscientious objections to the contraceptive mandate. That question depends in part on whether the corporations can have purposes and obligations that extend beyond the economic sphere.

The irony in these cases is that the corporations, asserting an ideologically conservative argument to be free of government regulation, are using arguments often made by progressive stakeholder theorists. For example, in the Tenth Circuit decision upholding the corporation’s right to be exempted from the mandate, the court noted the existence of “benefit corporations” (a business set up to provide material benefit to society) as an example of the phenomenon that corporations need not always be limited to solely economic purposes. A concurring judge, like Stevens, used the ALI Principles as a source of insight, but depended on a different reading: “But no law requires a strict focus on the bottom line, and it is not uncommon for corporate executives to insist that corporations can and should advance values beyond the balance sheet and income statement.”

Meanwhile, the Third Circuit held against the corporation, arguing that an entity that was “created to make money” could not “exercise such an inherently ‘human’ right.” A dissenting judge, however, used stakeholder theory to bolster his point: “It is commonplace for corporations to have mission statements and credos that go beyond profit maximization. When people speak of ‘good corporate citizens’ they are typically referring to community support and involvement, among other things. Beyond that, recent developments in corporate law … undermine the narrow view that all for-profit corporations are concerned with profit maximization alone.”

In short, the efforts of anti-personhood activists not only conflict with stakeholder theory on the conceptual level. In the political arena, too, a tension exists if only because the potential for reform is a finite resource. If we are indeed situated in a moment in which we can question the very framework of how our society views corporations and their obligations, we might make headway on changing the obligations of corporations within corporate governance law, or we might make headway challenging their role in politics. It is difficult to imagine that we could do both. This is especially true, of course, when the arguments of one conflict with the other.

In my view, the anti-corporate personhood movement understates the importance of corporations asserting constitutional rights, at least in some situations. Corporations are not people, to be sure. But neither are unions, churches, Planned Parenthood, the NAACP, Boston College, Random House, MSNBC, or The New York Times. Under several of the amendments proposed, all of these groups — because they are all organized as corporations — would lose constitutional rights. And it is worth emphasizing that more than free speech rights would be lost. They would also lose rights to be free from warrantless searches, the seizure of property without due process or compensation, and jury trials. Congress could pass a law saying that The New York Times could not pay its reporters, or that Boston College could not teach a course on Islamic law. Planned Parenthood could be raided without a warrant.

This is not to say I support the decision or reasoning in Citizens United — on the contrary. The decision was ham-fisted in applying First Amendment doctrine; activist in reaching out to decide questions not necessary to the case; and ignorant of the realities of corporate governance. But one does not burn down a house to rid it of termites.

Instead, stakeholder theory offers the best potential remedy to the harms of Citizens United — and indeed, the other risks of corporate power we have witnessed in the last few years. The key flaw of American corporations is that they have become a vehicle for the voices and interests of an exceedingly small managerial and financial elite — the notorious 1 percent. That corporations speak is less a concern than for whom they speak and what they say. The cure for this is more democracy within businesses — more participation in corporate governance by workers, communities, shareholders, and consumers. If corporations were themselves more democratic, their participation in the nation’s political debate would be of little concern. The cure, in other words, is not to fear corporate citizenship but to embrace it.