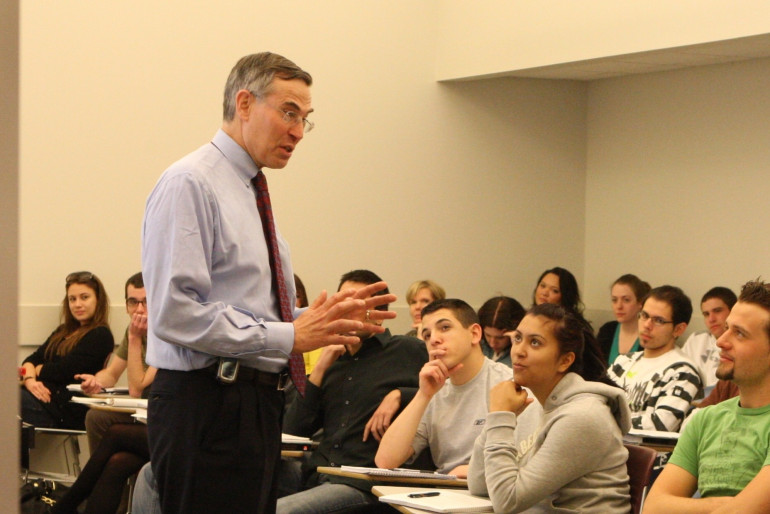 Rep. Rush Holt (D-NJ) has represented the Garden State’s 12th District since 1999. As one of the only two physicists in Congress, he began his career in academia. After teaching at Swarthmore College and working on arms control at the State Department, he became Assistant Director of the Princeton Plasma Physics Laboratory in 1989. He is perhaps most famous for beating the IBM computer Watson in “Jeopardy” in a demonstration match in 2011. Symposium Magazine interviewed him in October.

How well did academia prepare you for politics?

Academia was far more useful than one might think. There are so many topics in public policy that involve some science, and this is what helped me most before coming to the Hill. Often, there are cases where science is “embedded” in an important policy issue and people don’t even know it. Take election reform or voting rights – most people don’t think of these as technical issues, but they definitely have scientific components.

If you look at hearings on the Hill on any given day, at least half will have something related to “embedded” science. But chances are, these will have no witnesses from the scientific community. Science is often avoided. This is one the biggest gaps in understanding policy we have today.

Do you have examples beyond science, where your background helped?

Absolutely. Even though I taught physics, I also once co-taught a course on arms control with a religion professor, and we both talked about just-war theory and arms. Another course I co-taught – with a professor of math and a professor of psychology – addressed the question of how to make decisions in the face of uncertainty. We never got that one quite right, but I think some students enjoyed it. I also often held small seminars with students at my house, where we went into far-reaching policy talks.

Beyond science, there are many disciplines that have policy relevance and that get overlooked here on the Hill. Take the recent shutdown, and the subject of history. How much did we talk about past examples of shutdowns? Or more broadly, what does history show us of examples of a minority party trying to wield power beyond its numbers? It’s not as if people were bringing up, say, what the Federalist Papers said on this topic. But it would have been useful to add to the debate.

What about academic life more broadly? Can that lifestyle prepare you for politics?

I’ll have to say up front: Nothing in academia can really prepare you for politics. I think being a Representative is much harder – intellectually, physically, and psychologically – than being a professor. Intellectually, you have to constantly learn about a whole range of subjects that you may not know anything about, and then make policy decisions. You don’t just learn “more and more about less and less,” as the saying goes. You need to know something about everything. Physically, the demands of campaigning are grueling. And imagine what it’s like trying to stay in touch with 730,000 constituents, rather than several hundred students. Nothing in academia is like that.

But the psychological part is perhaps the toughest.  You don’t just have competitors in your department or field – you have people trying to undo you. It’s not just a race to get a paper out or come up with a new clever idea. You always have to be on guard against those who want to undo you.

What would you tell fellow lawmakers on how they can have a useful relationship with academic research? And what should academics do to emphasize the broader relevance of their work?

Members of Congress would be better off if there was more quantitative understanding of policy. There is very little of that, and we have such complicated issues we need to understand. But of course, this goes both ways. I think almost any academic work has some public implications, and academics should understand that. Even in the humanities and classics, you can do that — although it is, of course, harder. For every policy issue out there, there are academic studies that would illuminate it. The work is there, and lawmakers just need to read it. And I would tell academics who want to make a bigger difference: just do it. Use whatever time, whatever tools you have to get your research out. Or even run for office!